During the Munich IGAL AGM in 2017 a group of members, proud of having jumped from the roof of the Olympic Stadium, created a WhatsApp group called “The Flying Maharajahs” (guess who was one of the members!). The motto of the group was “When was the last time that you did something for the first time?” We have lived up to the motto many times since them: Nazgul as a career politician, Carol with a new Harley, Christian with two Miss Cambodia, Mac and Niti picking cherries in California. Othmar encountering bears in Canada, me diving in a “cenote” in Mexico, to name just a few examples.

I mention this because an event that we will all have to add to the list of “first times” is the IGAL AGM held on 19thNovember, 2020. It is the very first one to have been conducted on line.

As Katrien, Mme La Présidente, pointed out, it was a historical event. First, it demonstrated that IGAL is a strong group, ready to overcome any hurdles it encounters. Second, it proved that we members, in particular the lawyers, have more technical ability and are better prepared to adapt to the new times that we would have ever imagined.

Under normal circumstances, the AGM meeting should have been in person. It should have taken place in Madrid where I would have been the proud host. This fact was particularly relevant for me because it was the last meeting that I would have had organized prior to joining IGAL’s Old Boys Club, the group of IGAL members that have left managerial responsibilities in their firms but continue being active in their profession and want to remain close to IGAL. Incidentally, considering future female additions to the group, I have proposed to change its name to IGAL Emeriti Members Club. A bit pretentious but, I believe, a more accurate denomination

I have been a member, first of ICC and afterward of IGAL, since 1986. I served as President of ICC Lawyers Group, and organized two annual meetings and two midterm meeting in Spain. Madrid 2020 AGM was my last act (you know that we lawyers are all actors at heart). In Madrid, I would have thanked personally the past, present, and future IGAL members for all the years of friendship, fun and working together. I would have also let them know that they will always have a friend in Madrid who will be delighted to accomodate their visits and help them with any professional needs. Please accept these expressions as having been said in words to all of you. 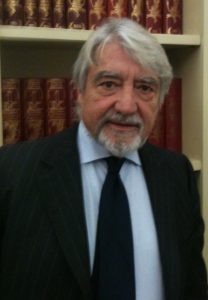