KING OF THE ROAD by Mike Djordjevich (USA) 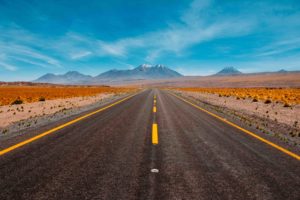 My early goal in life had been to be the King of the Road.  Maybe I liked that song by Roger Miller too much even though it had nothing to do with cars. You know: “I smoke old stogies I have found/Short, but not too big around/I’m a man of means by no means/King of the road.”

Is it that important to know what is around the next bend? Actually, it is crucial as all of Life’s secrets may be hidden there. And, imagine: you are missing it all by either flying over or sitting on your couch at home. In any case, why is it so important to get wherever we are going so quickly? What is the charm in that?

Obviously, train is better than flying, if there is a choice.

Cruising? Good God! One must have, in my opinion, a really, really good reason to cruise. Let’s talk about that form of so called travel some other time.

There are many reasons to get in a car and drive long distances for, apparently, no reason. Those reasons can be good or bad and everything in between. They may be societal, psychological, cultural, adventurous. One may be running away from or going towards something. The reason may be boredom. Or, maybe, an overwhelming wish to be alone.

I have been doing it all my life. I have crossed the North American continent multiple times. East to West; West to East; North to South; South to North; Southwest to Northeast and many other combinations. What is missing from this global accounting, obviously, is the diagonal of Northwest to Southeast. I am working on that, planning and anticipating it.

I have just come back from a road trip of 1900 miles (about 3200km). Hey, what do you expect, it is North America. It is as big as it is beautiful. The trip took me through several, vast Western States. Many lonely roads stretching for miles going through the deserts, flatlands, mountain passes, fields, river valleys. There was time to think, meditate, reflect upon one’s existence, make plans and meditate some more.

One of the benefits of this particular trip was that I was out of wi-fi/internet range for the good part of it. My enjoyment of the activity and the surroundings was not constantly interrupted by the bells and whistles of texts, e-mails, announcements and warnings.

I affirmed my belief that it is not necessary to be informed, contemporaneously, about current world events. (If we are all going to die in some nuclear explosion, I am not sure I want to know about it in advance anyway).

As to other announcements: do I really need to react to a tsunami warning 300 miles away as my phone thinks I am still on the coast? As a private and inconsequential citizen, I don’t need to stay on top of events I can do nothing about. I don’t even need to know about them.

On a long, open highway in the middle of nowhere I really needed to think of these two things: do I have enough petrol and water? Makes it simple and useful.

Being outside of the big urban centers is not only relaxing but eye opening. Turns out that towns can be clean, friendly, orderly and pleasant. The smaller, the better.

Etc. etc. Don’t you want to be the King of the Road?